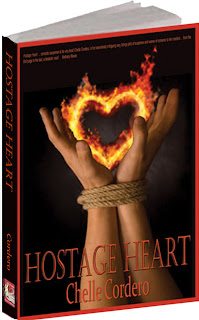 I am a romantic dreamer. Despite all of the rumors that writers are full of angst, I really like my life - so I love to write about the things in my life... but my books are pure fiction.
After the 2005 hurricane season and the devastation it caused to parts of Louisiana and Texas, I heard many stories about the people down there and their remarkable spirit. (As an aside, my hubby was a rescue worker down there and he came home with incredible stories to tell.)
Deanna Blair, the heroine of my book Hostage Heart, was born from these stories. Add to that my sometimes "questionable" imagination and my need to let everyone have their special romantic moments and I added Ryan Hunter and a few other interesting characters. Then I tossed in a bank robbery.
The book starts in New York City, a city that never sleeps and the place where I was raised. The bulk of the story takes place down south in Baton Rouge, LA and Little Rock, Ark. Although I grew up with a southern-born mama, I still did a lot of research into Deanna's Cajun heritage and the local customs. It was really fun for me.
I want my readers to experience the flavors of a beignet (a Louisiana fried fritter) and the dialect of a Cajun as they read my story. More than that, I want them to feel the love between my characters and each of the relationships they have. And of course I hope that they sit on the edge of their seats as they wonder what will come next.
Here's an excerpt:
Deanna tried to pull away. Tears came to her eyes. “Please, let me go.”
“Hey Roy, Miss Southern Bell said please.” He mocked her pronunciation. One of the other two men laughed at her distress.
The third man got up and grabbed her chin. He held her face still as he forced the neck of another open bottle of beer between her lips and poured. Deanna choked and spit out most of it.
“Come on, swallow.” He kept pouring and she finally swallowed some to keep from choking. “That’s right baby, you’re going to feel much better. We just want you to enjoy too.”
After most of the contents of the bottle of beer was either down her throat or spilled down the front of her blouse, the bottle was put on the table. Deanna fought to keep from gagging as the beer hit her stomach and started an abrupt return trip. “I’m going to be sick.”
The first guy stood and nearly dumped her on the floor. They let her heave the contents of her stomach while she bent over. They laughed at her. When she was done, one of the men splashed her face with even more beer to rinse her off. Then the front of her blouse was torn open.
“Oh God, please don’t...:” Unable to defend herself or run away with her hands and feet still tied, she cried and pleaded.
Tugging the front of her bra as if to rip it off of her, the second guy found her grandmother’s ring. “What’s this?” He dug the piece of jewelry out.
She looked longingly at the ring. “Please, that’s all I have left of my mamere.” They still hadn’t recovered the old woman’s body long after the flood waters receded. “Please don’t take that.”
One of the men leered at her. “Maybe we’ll let you earn it back.”
“What the hell is going on here?” His booming voice surprised everyone.
“Hey man, we were just having some fun. She doesn’t mind. Do you?” One of the three drunken revelers pouted.
“I told you, she’s my property... and I don’t share with anyone.” The pseudo bank customer had returned from his errand. He walked to them and grabbed her roughly by her arm. “What’s that?” He questioned the guy with the ring in his hand.
“She was hiding it.”
“Give it to me. Now.” The ring was put into his outstretched palm and he put it into his pocket. He looked at the floor where she spit up. “Clean this up.”
“Hey man, we were just bored.
“That’s not my problem.” He pulled Deanna into the small kitchen and helped her wash her face and rinse her mouth at the sink.
“So long as Jacob is gone, I’m in charge around here. And I don’t like having my orders ignored.”
Posted by Chelle Cordero at 2:47 AM