Why should you vote for the lesser of the evils? ~ #MondayBlogs

Like many, I haven't felt in recent years that there was a single candidate for President (or any political office for that matter) where I agreed 100% with his/her philosophies - but I did feel that there were some decidedly better than others.

I wouldn't expect any one candidate to make all of the decisions I would want, how could he? It would have to be ME making those decisions and hoping that I got it all right. So each year I go to the polls and vote for the candidate that I least disagree with... you may call it the lesser of the evils, I call it the best choice of what is available.

So far in my years of voting I haven't yet regretted the vote I cast and there have even been a few rare times where I begrudgingly have felt "hey this one isn't AS BAD as I thought he would be."

But if I don't cast a vote for the candidate I think would do the least damage then I am handing over my destiny to others who, just like a politician, don't necessarily think the way that I do — it would be simply handing over my life without a fight.

I know which candidate I will probably vote for in the next presidential election, from track records and speeches I know which candidate comes CLOSEST to who I want in office. Even with our confusing electoral college elections, I still believe that majority votes will more likely get us the candidate MOST of us want IF WE GET OUT AND VOTE.

Please don't sit back and let a few make this decision; if you don't trust or like any of the candidates at least cast your vote for the one you LEAST DISLIKE... someone is going to get in, give yourself a say in the decision. 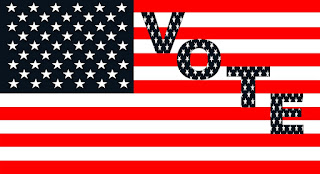 
for information on registering to vote
visit www.vote411.org/

Posted by Chelle Cordero at 2:38 AM

You tell them Chelle...loved it.