The World Needs to Know

Yom Hashoah 2021 is observed at sundown, Wednesday, April 7th and ends at sundown on Thursday, April 8th. Yom Hashoah, also called Holocaust Remembrance Day, commemorates the lives of the Jewish people who died in the Holocaust between 1933 and 1945 more than 76 years ago.

Approximately six million Jews and some 5 million others, targeted for racial, political, ideological and behavioral reasons, died in the Holocaust. More than one million of those who perished were children.


This day is remembered in the Hebrew calendar on the 27th day of Nisan. 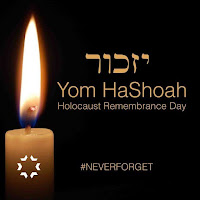 Posted by Chelle Cordero at 6:00 PM