from A Chaunce of Riches

A Chaunce of Riches
by Chelle Cordero 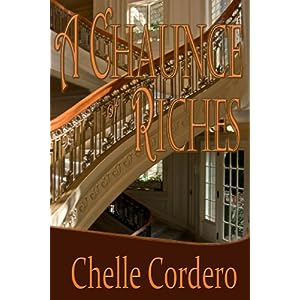 Between the letter of introduction that Samantha Chaunce sent to the school and a few personal phone calls she made, Ben had no trouble being allowed on school grounds. He was close by whenever Philip needed him. The teacher even seemed amused when Philip stated that he wanted to bring his bodyguard to class one day for show and tell.

The teaching staff was friendly and so were a few of the moms of other students. In less than a week, Ben had politely turned down two dinner invitations, a theatre ticket to accompany one woman, and had received assorted phone numbers. He was charming, polite and friendly to all. Each day he kicked himself. Ever since he saw Sam again he wasn’t interested in anything any other woman had to offer. Ben told himself he was pitiful. Not only had Sam dumped him once already because he was broke, but now that she was wealthy on her own, he knew there was no way he could ever be of interest for her again. Then he got annoyed with himself for even entertaining the possibility.

The atmosphere back at the house was surprisingly pleasant. Sam seemed to go out of her way to make him feel comfortable. Cook prepared a few of Ben’s favorite dishes for dinners and he couldn't help but suspect that it had been more than simple coincidence. He marveled that Sam might actually have remembered such things about him. Ben wondered if his services were really needed though. There had been only one incident since Ben had been there. Sam received a letter at her office mentioning some of the security measures she had arranged. It even mentioned the security agency where Ben was employed. She seemed not to be worried by the unfriendly surveillance. Ben didn’t like it at all. He wasn’t comfortable with the level of knowledge her tormentor seemed to possess about her home and her dealings.

The next afternoon while Ben was waiting for Philip to appear after school, he noticed a strange man wielding a camera on the corner of the school block. The man was watching the front of the little school building intently. As soon as Philip appeared, the camera was lifted and pictures were taken. Ben made sure the teacher would keep a close eye on Philip and he took off after the unknown man with the camera. The guy ran fast, but Ben was faster. He caught him in an alleyway just a block from the school.

Grabbing him by his jacket front, Ben pressed his face close to the culprit. “Who the hell are you and who are you working for?” He moved one large hand to the guy’s throat. Ben was ready to strangle the man if he didn’t answer quickly enough.

“Hey, it’s just a picture.” The frightened man tried to escape Ben’s clutches. “The Chaunces’ are news especially since the old man kicked the bucket. And who the hell are you?”

Still holding him by the throat, Ben relaxed his stance a little bit. “You’re press?”

The uninvited photographer nodded against Ben’s hand at his throat.

“Let me see your ID. And your camera.”

As soon as Ben read the media identification, he let go of the guy. He flipped open the back of the camera and pulled out the film.

“My job.” Ben handed the empty camera back and unrolled the film in the daylight.

“If I ever see you taking pictures again I will break the damn camera. And it will definitely be in the company of some of your body parts. Am I understood?”

After calling Ben several foul names, none of which even made him flinch, the dejected photographer finally left. Ben threw the exposed and ruined film out in a trash can on his way back to the school.

Philip was gently swinging on a swing set on the school’s lawn; he was under the concerned eye of the young teacher. He had no idea that anything untoward had happened and Ben decided to keep it that way.

A Chaunce of Riches by Chelle Cordero

I stopped by your blog today.
Ann