There have been innumerable losses since due to injuries and exposure to the toxic dust at Ground Zero.

As a former Rockland County NY resident, I have always listed those
local residents that we lost on 9/11/2001
Ø Janet M. Alonso 41 Stony Point NY
Ø Calixto Anaya Jr. 35 Suffern NY
Ø Japhet J. Aryee 49 Spring Valley NY
Ø Richard E. Bosco 34 Suffern NY
Ø Sgt. John Gerard Coughlin 43 Pomona NY
Ø Welles Remy Crowther 24 Upper Nyack NY
Ø John D' Allara 47 Pearl River NY
Ø Bernard D. Favuzza 52 Suffern NY
Ø Thomas Foley 32 West Nyack NY
Ø Andrew Fredericks 40 Suffern NY
Ø Robert Joseph Gschaar 55 Spring Valley NY
Ø Dana Hannon 29 Suffern NY
Ø Capt. Frederick Ill Jr. 49 Pearl River NY
Ø Farah Jeudy 32 Spring Valley NY
Ø Joseph Marchbanks Jr. 47 Nanuet NY
Ø John Marshall 35 Congers NY
Ø Patricia A. McAneney 50 Pomona NY
Ø Robert Garvin McCarthy 33 Stony Point NY
Ø Robert William McPadden 30 Pearl River NY
Ø Luke G. Nee 44 Stony Point NY
Ø Gerald O'Leary 34 Stony Point NY
Ø David Ortiz 37 Nanuet NY
Ø Lt. Vernon Allan Richard 53 Nanuet NY
Ø Thomas G. Schoales 27 Stony Point NY
Ø Mohammed Shajahan 41 Spring Valley NY
Ø Gregory Sikorsky 34 Spring Valley NY
Ø Catherine T. Smith 44 West Haverstraw NY
Ø Robert W. Spear Jr. 30 Valley Cottage NY
Ø Loretta A, Vero 51 Nanuet NY
Ø Benjamin Walker 41 Suffern NY
Ø Weibin Wang 41 Orangeburg NY
Ø Steven Weinberg 41 New City NY
Ø Capt. David T. Wooley 53 Nanuet NY
Visit the 9/11 MEMORIAL & MUSEUM online
It is so hard to realize that 20-years have passed since that dreadful day.
My husband and I were home that day, together, when my sister called me. She had been watching television when the news broadcast came in that a plane had hit one of the World Trade Center Towers. Ironically my husband had been working down there the day before on an Audio-Visual event, it was scheduled for 2-days, but one of the presenters had a prior commitment, so it was scheduled for the 10th and the 12th instead.
Two planes had crashed into the North and South towers of the WTC. A third plane crashed into the Pentagon. A fourth plane crashed in Shanksville, Pennsylvania after passengers tried to take the plane back from the terrorists behind this horror. There were 19 terrorists on the 4 planes in this suicide mission.
I remember the panicked calls from my son, in high school at the time, and my daughter, away at college. They wanted to know where their dad was.
Being members of our local ambulance corps in Rockland County NY, we responded to the building. No one knew what to expect next. There had been futile hopes that there would be many survivors who needed medical help and our local ambulance corps made preparations to help unload victims for transport to local hospitals. Sadly, that need never came to be.
Rockland County ambulance corps sent rigs to the scene that evening to try to help. My husband was on one of those rigs. Our son, a youth corps member at the time, helped to stock the truck and watched as his dad and crew drove away. My husband returned home very early the next morning — there had been no survivors to treat or transport. He cried at what he had seen.
Our daughter came home from college to help in the ambulance building. We did have several local residents walking around dazed, some of them were still hoping to hear from loved ones who had been in the buildings. They came in for comfort, for blood-pressure checks, and just to be able to sit and cry.
Rockland County had lost more than 30 souls that day, I knew a few of them, and I knew a few of the families. Some who died had been at jobs, some were passengers on the ill fated flights, others were 1st responders, firefighters, police and EMS, who tried to save as many as possible. Even days later, no one was able to fathom what had just happened.
Over 40% of those who died that day have yet to be identified even 20 years later. There have been more than 1500 deaths from various cancers among Ground Zero responders and those who lived or worked in the area. Many more are fighting  Certified WTC-related illnesses.
Today, September 11. 2021... the heart still aches for all we lost. 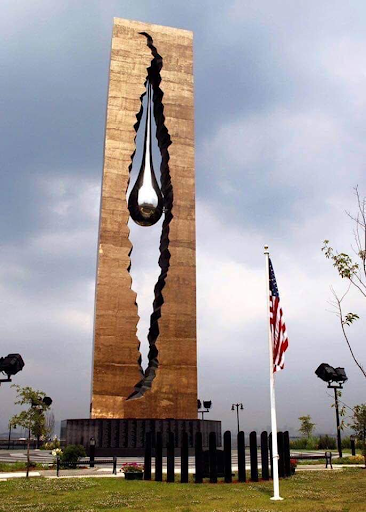