With only paperwork left after rescuing the young girl and arresting the remaining kidnapper, Dave is left alone with his thoughts...

Normally Dave would be excited about breaking a case, but he was still confused by what he had seen that morning. He couldn’t get his mind off of the pretty lady who literally vanished in front of his eyes, at least he thought she did. Maybe he was just losing his mind?
Once more he wondered if they had played a joke on him; it had to be a joke because if it wasn’t then something definitely wasn’t right in his head. They had been awake all night following leads; he was tired and seeing things that weren’t there, it was just a hallucination. He continued to repeat those words in hopes of believing it.
The only thing Dave knew for sure was that he wanted to see her again.

In light of the violence and senseless deaths in America in recent weeks,
I keep repeating a few lines from John Donne's famous poem:

No man is an island,
Entire of itself.
Each is a piece of the continent,
A part of the main.
If a clod be washed away by the sea,
Europe is the less.
As well as if a promontory were.
As well as if a manor of thine own
Or of thine friend's were.
Each man's death diminishes me,
For I am involved in mankind.
Therefore, send not to know
For whom the bell tolls,
It tolls for thee. 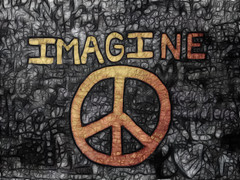 Sounds like he's getting in deeper than he knows yet. Good snippet, Chelle. :)

I hope he gets to see her again and get an explanation.

"She's just an hallucination." But he wants to see her again. I think he really is overtired!

At least he knows he wants to "see" her again and not running scared. :D

Oh, Dave! I love how he's trying to rationalize what he saw, at the same time he wants to see her again. Great excerpt!

Wonderful snippet. The cross between reality and what this new reality is becomes fascinating.

Love the twists in this story Chelle. Dave is not the only one having problems working out what's going on. But at least he is intrigued...

Love the twists in this story Chelle. Dave is not the only one having problems working out what's going on. But at least he is intrigued...

Poor Dave sounds really confused. And tired. It would definitely be hard to believe what he saw!

This is another nice development in an intriguing story. I like the premise, Chelle.

I can't wait see what happens when Dave finds out what's going on! Editing note: "Once more he wondered if they had played a joke on him." To which 'they' are you referring?

Thinks he's losing his mind, but why not lose it over seeing her again. Love it. :)

I like that he's trying to find a rational explanation. This is such a good story, Chelle!

He's starting to look forward to seeing her! I'd call that a first step toward acceptance.

I don't think I'd want to see her again. I don't like it when people just disappear in front of me, LOL. The excerpt was nice though. It gave me that hold your breath feeling.

Ha! I think he's just contradicting himself just a little there. He hopes it's a hallucination, yet he wants to see her again... Hmm... Someone is going to get themselves into a pickle with those two sides of the same coin. I like he tries to logically rule it out though, as any normal person probably would. Except me, but I know I'm not normal. LOL.

Dave can keep repeating the words to himself all he wants, but I don't think that'll make them come true! :-)

The contrast between him trying to convince himself she wasn't there and wanting to see her again is a perfect description of his confusion. He'll work it out, I'm sure. :)

Is good that he is open to the possibility that she exists even if he also think she might not.

Awww how sweet. Another great snippet.

TRying to find a reasonable explanation when there might be none... At least he wants to see her and not run for the hills!