On the average every year from late summer through early November everyone is buzzing about who is running for what office, rumors and meme’s overrun social media, and invariably some “friendships” are ended after heated exchanges.

Growing up all of the neighborhood parents painstakingly instructed all of us kids “Never discuss politics or religion”. To that I say HOGWASH. I believe discourse between opposing views is necessary to growth.

The meaning of the word discourse is “written or spoken communication or debate”; the key term is communication. When I was in junior high school my social studies teacher assigned all of the students to debate teams. Ironically we each had to argue the opposing view from our personal beliefs. The class of 30 (yes, large class sizes) was irate as we were tricked into voicing our honest opinions on subjects such as gun control, abortion, euthanasia,  the draft and other such hot-button items only to be told we had to argue against the very things we believed in!

Mr. L explained that the only way we could be sure of our convictions was to understand all sides and to respect the opposing views. Respecting other viewpoints does not mean we agree, as a matter of fact our willingness to hear other views indicates that we have confidence in our decisions; likewise closing our ears and minds to different beliefs may even be from fear that we could be easily swayed.

Now remember I called this exchange discourse. Discourse is not argumentative or insulting, it’s not threatening and should certainly not include generalizations based on race, ethnicity, gender or religion. Yes we are all guilty of chuckling and sometimes passing along a funny meme or two, sometimes these memes are applauding a candidate or political office without insulting anyone — and yet the vitriol that follows  gets out of hand.

These are the interactions I don’t care to entertain. When an otherwise intellectual conversation is polluted with nasty barbs, insults or profanity then the positive exchange of knowledge and ideas ceases to exist; when someone is being verbally (and sometimes physically) attacked thinking logically often flies out the window and the result is usually anger, yelling, cursing and insults that have no bearing on the original disagreement.

So let’s discuss the issues and stay informed, but leave the fighting elsewhere.

By the way, the next United States Election Day is ‎November 3, 2015. Have you registered to vote yet? 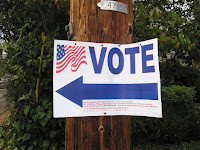 Posted by Chelle Cordero at 2:56 AM