I have a guest blog on Lindsay's Romantics today

Do you ever wonder why I am such a hopeless romantic?

Well check out my post today on Lindsay's Romantics -

Posted by Chelle Cordero at 1:27 PM No comments:

Are you planning to hit up the stores this Black Friday?

Personally I prefer to do a lot of my shopping online and avoid all of the crowds and parking hassles.

Whether you plan to shop online or at the mall, I scoured the net for some great gift suggestions for this holiday season,

and while we are on the subject of Amazon, they sell lots more than just books - Check out some terrific books that make super Christmas and Chanukah presents including mine! All of my books are available in print and in multiple ebook formats.

- FREE! & downloadable Ebook
37320 words. Fiction by Vanilla Heart Publishing on August 29, 2009
Enjoy a good taste of Chelle Cordero's novels, Bartlett's Rule, Forgotten, Within the Law, Courage of the Heart, Final Sin, and her yet-to-be-released A Chaunce of Riches

A Chaunce of Riches by Chelle Cordero (Paperback - Nov 13, 2009) # ISBN-13: 978-1935407263
Ben Johnson was hired as a bodyguard for a rich widow and her kid, but he never expected to be working for the woman who had abandoned him just when he had needed her the most. Damn it all, he still wanted her. Samantha Chaunce never thought she would have to explain why she married the rich man instead of Ben. Or that her husband had been murdered...and Ben was the prime suspect. EBOOK

Final Sin by Chelle Cordero (Paperback - May 1, 2009) ISBN-13: 978-1935407133
Deputy Sherriff Commander Jake Carson has his hands full... investigation of a brutal multiple homicide, a troubled son and a vindictive ex-wife. He meets young, free-spirited paramedic Julie Jennings. When Julie becomes the object of an obsession, it puts both of them in danger... EBOOK

Courage of the Heart by Chelle Cordero (Paperback - Jan 15, 2009) ISBN-13: 978-1935407188
Sometimes love is the only cure for the very deepest of emotional wounds. The story of the two lovers takes a series of unexpected and fast paced turns where lives, sanity and love are put in jeopardy. Their commitment to each other results in a spirit that binds them together. EBOOK

Within the Law by Chelle Cordero (Paperback - Oct 2, 2008) ISBN-13: 978-0982115046
Tom gave up on ever falling in love again the day that he buried his high school sweetheart and fiancé. Just when he is about to see justice done, he meets Alli Davis-the defense attorney for the murdering rapist who took his love from him. EBOOK

Forgotten by Chelle Cordero (Paperback - Jul 25, 2008) ISBN-13: 978-0979654572
Forgotten is an unforgettable romance about two people who meet by chance, love by choice and are torn apart by intrigue. Their romance survives a foreign threat to national security, kidnapping, personal tragedy and a murder attempt. EBOOK

Bartlett's Rule by Chelle Cordero (Paperback - April 3, 2008) ISBN-13: 978-0979654534
Lon and Paige's love affair is filled with hardship, emotion, danger and triumph. Falling in love was never the challenge; being there for each other, knowing just what to say and making it work is the real test. Paige has to learn to trust. Lon has to learn to be patient. EBOOK

Posted by Chelle Cordero at 3:10 AM 2 comments:

Half year anniversary for my Kindle Blog Writing Workshop

Today marks my half year anniversary for my Kindle Weekly Writing Workshop
Every week since May 29, 2009 I have posted lessons that discuss and teach about being a writer including hints and tips about the industry. The posts include handy writing exercises and prompts and cover topics about POV, character building, giving your words more impact, setting a visual scene, publishing, finding a target audience, blogging, promotion and more.
Check out My Weekly Writing Workshop for your Kindle or PC
just go to http://bit.ly/pILcG for details. 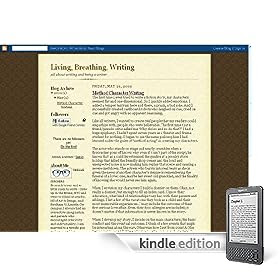 Kindle Blogs are auto-delivered wirelessly to your Kindle .

Can be Delivered to your Kindle or other device
Posted by Chelle Cordero at 1:28 AM No comments:

A Four Cup review of A Chaunce of Riches

A Chaunce of Riches was reviewed on Coffee Time Romance

"...it was not long before I found myself wrapped up in the exchange of emotions and sensual pull between Ben and Sam. When the suspense continued to build to an almost breaking point, it made this good story that much better."
(read the full review)

A Chaunce of Riches
By Chelle Cordero

"Vanilla Heart Publishing is pleased to announce our nominations for the 2009 The Pushcart Prize - Best of the Small Presses, published every year since 1976, and widely recognized as the most honored literary project in America.

A Winning Title Was Chosen!

I sent Kimberlee a complete list of suggested titles for my new manuscript you can read about the quandary we faced here: http://bit.ly/ApGV7 ). It was a terrific list and Kimberlee made the choice (I understand she got some input from our favorite in-house editor - Smoky)

And here is the complete list of titles I received:


Thank you so much to all of you who submitted! Thank you each: Barbara, Malcolm, Lindsay, Kathleen, Judy, David, Eva, Charmaine, Jackie, Miikell, Eda, Jane & Bill, Bobi, and Michael.
Posted by Chelle Cordero at 6:26 PM 3 comments: