Is it just a dream?

“Tomorrow. He won’t know what’s coming.” The man sitting on the lower bunk was picking at his nails with a shiny blade.

“In the showers?” Another man had his back to her as he urinated in the stainless steel toilet in the corner.

“Yeah. The guards will keep everyone out.” He heard someone walking down the corridor and quickly stashed the metal razor under his mattress.

The men didn’t see Annie standing there, but then she was only dreaming. It looked like the inside of a prison cell. Even though she knew she was dreaming, she could still smell the rancid sweat and it nauseated her. She was glad they couldn’t see her. They were making plans to hurt someone – she needed to find out who that someone was.

“He’s gonna deserve what he gets. He’s gotta learn to respect the right people around here.”

“But we’re not gonna kill him though?”

“No. Just maim him real good. That’s what we got paid for.”

“Shit, I wouldn’t mind doing Furman in for good. Don’t like his ‘tude, thinks he’s better than everybody.”

Furman? Was this the prison Scott was in? Annie visited him once, but that was in the waiting room. That was the day they signed the divorce papers. She had to find him and warn him.

Annie slipped into the corridor and moved past each cell until she found him. He was in a cell by himself and huddled under a scratchy blanket in the bottom bunk, but he wasn’t sleeping. He looked scared, and thinner than she remembered. She actually felt sorry for him.

He lay on the mattress with his eyes open and stared right through her. 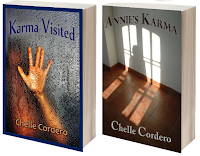 Posted by Chelle Cordero at 7:42 AM No comments:

Who is Chelle Cordero? — A little bit about me...

Hi all. You may already know me from my many posts, my Facebook Author Page, my Website, any of the many Tweets or other posts I've made... I'm not exactly shy, lol.

I've borrowed some words from my publisher's website VHPBookTours.com and want to tell you a bit about myself, sort of an introduction for anyone who might be interested.

Thank you for reading. (and thanks to Kimberlee [VHP managing editor/publisher] for making me look so nice!)


Chelle Cordero writes stories of Passion and Suspense. Vanilla Heart Publishing has published eleven Cordero novels:Bartlett’s Rule; His Lucky Charm; Within the Law; Courage of the Heart; Final Sin; Hostage Heart; A Chaunce of Riches;Common Bond, Tangled Hearts; Hyphema; Karma Visited; and Annie's Karma.  Chelle has been writing both fiction and non-fiction for the bulk of her adult life and has been with Vanilla Heart Publishing since early 2008 and is a proud member of Romance Writers of America.
Her books have earned many plaudits which includes:Bartlett’s Rule was named one of Carolyn Howard-Johnson’s Top Ten Reads for 2009; Final Sin was an Honorable Mention in the Fiction Category of the 2010 NY Book Festival and a 2009 Pushcart Prize nominee.; Hyphema won the Dec 9, 2011 Friday Book Cover Vote on the Shades of Love website; A Chaunce of Riches was Winner of D. Renee Bagby’s readers’ choice for The Best Overall First Chapter, April 2010; and Hostage Heart,Final Sin and A Chaunce of Riches had top ten finishes in the 2009 Preditors’ and Readers’ poll. Chelle was also featured in “50 Great Writers You Should Be Reading” published by The Author’s Show in 2010.

My books can be found online at:
Amazon
Barnes&Noble
Smashwords
Apple
KOBO
Scribd 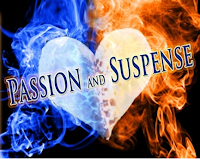 Posted by Chelle Cordero at 1:59 PM No comments:

Do You Believe in Karma? 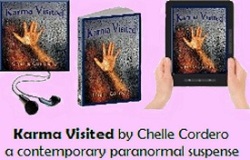 "My life changed after I died.It’s not like I had any special powers.They just didn’t understand me.They underestimated me.I had a gift."

The girl sobbed and Annie looked at her again. The girl was staring back at her. Her eyes were wide with fright.
“Can… you… see me?” Annie’s voice was shaky. Her dreams had always taken her to accidents, disasters, and the victim was always ready to die. Annie hoped this girl wasn’t going to die. This wasn’t an accident, this was evil. “Where are we?”
The young woman just continued to stare. Confused, Annie wasn’t sure the girl actually saw her, but when she moved she saw the other woman’s eyes following her. Then she wondered if the girl could hear the things that Annie said, maybe that was the problem.
“You do see me.” The girl still wouldn’t answer, she just cried. “Tell me what you can and I will try to get you help.”
No answer.
“I need you to tell me something, anything. Who are you? Where are we?” The girl cried harder. Annie was frustrated. She looked around the room, it began to spin. She closed her eyes and held her head. 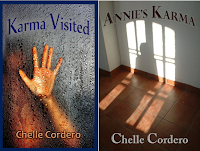 Posted by Chelle Cordero at 12:38 AM No comments: