…and I applaud the writers of Harry’s Law for challenging the assumptions of RAPE in tonight’s episode (And the Band Played On). Among the finer points (and I apologize if this is a little too brutal), it was stated CLEARLY that rape is not always a stranger holding a woman down at knifepoint  - it CAN be date rape, a man can be victimized, and at times the victim can even climax and it doesn’t mean they enjoyed it. The show’s characters even had some debates amongst themselves. It was a very interesting episode.

Bartlett’s Rule is a love story. When I wrote it my intention was to challenge the assumptions made about rape. Paige was raped by someone she knew and trusted and even the hero of the story, Lon, has to “wrap his head” around the concept. It all comes down to CONSENT.

In the real world many good and caring people have had to rethink their attitudes. As we wind down to the end of April, Sexual Assault Awareness Month (SAAM) I encourage everyone to continue healthy discussions about respect, sexuality and consent. Talk to each other. Talk to your kids.

For resources to help guide you, please refer to the Sexual Assault Awareness Month website. Click around for fact sheets and discussion starters. A bit of knowledge goes a long way.

Posted by Chelle Cordero at 1:01 AM No comments:

She nodded. Memories flitted through her mind as if the event had just occurred. She swore she could feel the shock and disbelief... and the pain. “Hal was distraught. He begged me to take him back... again. But I couldn’t. He kept calling me but I kept saying no.” She paused unsure whether she could continue, but when she looked at Lon and saw his compassion staring back, she felt stronger. “He was waiting in the apartment one day when I got home from work. I hadn’t thought to change the lock. I didn’t realize he still had a key. He was crying and he begged me to talk, just talk. So I said okay.”
Lon saw Paige glance at the clock over the stove. Her courage seemed to falter. “Take your time. There’s no hurry.”
“We argued again. I asked him to leave. He refused. So I said I was going out for a while and would he please be gone by the time I got back.” She felt the sob build inside her. “I finally went to walk out, he grabbed me just inside the door of the apartment, pushed me to the floor, held me down covering my mouth, pulled my clothes off and entered me. Hal said he was showing me he loved me. It was painful. I must have formed a mental block because although I remember being scared about pregnancy, I honestly couldn't remember or figure out if he used a condom or came in me.”
He suppressed the ripple of anger he felt. “You were in shock.”
“I never thought he would really hurt me and believe it or not, I was afraid in the beginning of the attack to fight back and hurt him. So in some ways, I almost feel as if I let him do what he did because by the time I did start to fully fight, he had me pinned down. I couldn’t get him off of me.”
He waited. She was quiet and just stared at the table top. “What happened next?”
“I... I got up and got dressed and I left. I went to a friend’s house. I thought she was a friend. I was crying so hard. I remember her saying to me ‘Well what did you expect, you never said no to him before.’ The guilt really set in after that and I blamed myself.”
Sighing, Lon realized how Paige had been betrayed twice, once by Hal and once by that so-called friend. “So you didn’t think you had the right to report it as a crime.”
She cried. “She convinced me it was my fault. And I knew I hadn’t fought the way I should have. I waited a while and then I called my apartment to make sure he had gone. I went home and showered. I douched. I tried to wash it away. I even threw out the clothes he had torn off of me.”
Lon stood and started to go to her. Then he thought to ask first. “May I hold you?”
Paige choked back her tears and nodded. “I’d like that.” She stood and went into his arms. It felt good to be comforted.
“Ssh.” He held her and soothed her hair away from her face. “None of it was your fault. Hal had no right to do what he did to you.”
“But I didn’t fight him.”
“You trusted him. He betrayed that trust.”
“I... I thought he loved me. He was the first man I had ever been with. We had been sleeping together from before we got engaged. My friend was right, I never told him no.”
“Your so-called friend wasn’t much of a friend. You didn’t do anything wrong, Paige.”
She cried into his shoulder and Lon just held her.

Posted by Chelle Cordero at 9:35 PM No comments:

Living on the edge

Heroes and heroines in romantic suspense stories seem to always live on "the edge", flirting with danger and taking chances.
Sometimes the "chances" they take are putting off doing things they should be doing earlier, like sharing a truth, saying I'm sorry, or saying I love you.
In His Lucky Charm, Brandon nearly loses Caitlyn when he fails to tell her of the double life he leads... and then she finds out. In A Chaunce of Riches, Ben is too stubborn and hurt to tell Sam that he still loves her... and then it appears he may have lost her forever. And in Bartlett's Rule, Paige feels that she needs time to work things out by herself... and then worries that she has missed her chance for Lon to want to spend his life with her.
People procrastinate for a variety of reasons. Every year we hear of last minute gift shoppers hitting the stores the afternoon of Christmas Eve! And every year we hear hair-raising stories of folks sending out their tax returns in the "eleventh hour" and looking for those elusive post offices that are still open until midnight - Yikes! (btw, electronic submission is so very easy)
Here's a good article for last minute filers:
Tax Deadline 2012: What last-minute filers should know
So, have YOU filed yet or is this your way of living on the edge?
Tell me about it, leave your comments below.
Posted by Chelle Cordero at 4:32 PM No comments:

IT’S TIME … TO TALK ABOUT IT

The month of April has been designated Sexual Assault Awareness Month (SAAM) in the United States. The goal of SAAM is to raise public awareness about sexual violence and to educate communities and individuals on how to prevent sexual violence.

permission for something to

happen or agreement to do

something. Consent is more

than yes or no. It is a dialogue

about desires, needs, and level

of comfort with different sexual

interactions are rooted in 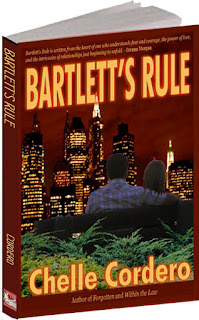 I wrote Bartlett's Rule to emphasize that "victims of sexual assault" can be survivors. These women (and men) can live and love again. Sexual assault affects more than just the survivor, it effects all of the people around her or him.

Bartlett's Rule shares the story of Lon and Paige's love affair - a romance filled with hardship, emotion, danger and triumph. Falling in love was never the challenge being there for each other, knowing just what to say and making it work is the real test. Paige and Lon are real, they are human, they cry and they laugh. Paige has to learn to trust. Lon has to learn to be patient.

From the introduction: "He is a pompous ass!" When Paige Andrews is given the assignment of courting a famous writer for the publishing company she works for, she meets and entices the sexy, charming and thoroughly dangerous womanizer, Lon Bartlett. Lon immediately takes a not-so-professional, personal interest in the young woman and pursues her. Lon is thrilled when Paige finally succumbs to his charms only to find that her haunting past sets off a terrifying reaction. Lon learns a heartbreaking reality - Paige is a rape survivor.

Will Lon be able to change his womanizing ways? Will he want to? Will Paige ever learn to trust again? Can they learn to love and live, together?

Bartlett's Rule
By Barbara Moroch
A fantastic read -- a love story between two seemingly very different kinds of people. Between all the tribulations that get in the way of their romance, they ultimately triumph. The story is so well crafted and the characters evoke lots of emotion from the reader. The plot takes lots of twists and turns and underscores the severity of rape crimes and the lasting damage it inflicts upon its victims. I look forward to reading the author's second novel, "Forgotten." Its preview seems to be as captivating as this book was!

Make it your rule to read "Bartlett's Rule"
By Bobi
When Paige and Lon met it was purely for business but it wasn't long before their hearts took control. Paige's past comes back to haunt them and they soon come to realize that the devastating effects of rape and abuse extend beyond time and place to impact more than the primary victim herself. Lon has to grapple with his own intense anger and hurt over Paige's assault. He also has to overcome misperceptions of his personal character while building a foundation of trust between himself and Paige.

"Bartlett's Rule" is more than a love story; it relates a valuable lesson for both men and women.

Chelle Cordero has arrived.
By Cara Somers
In Bartlett's Rule the author skillfully captures emotion and feeling in a well written and thought out novel. Its a great read as are her other novels. This author is a true hidden gem.