Hyphema by Chelle Cordero
Hyphema: Bleeding in the eye caused by trauma… Matt Garratti, a paramedic from New York, moves his wife and son to North Carolina to work at his dream job as a flight medic. Pakistani born Sudah, his wife, receives frosty stares and insensitive comments from their new neighbors... Matt wonders if he is pursuing his dream or bringing his family into a nightmare from which they may never wake.

KINDLE SMASHWORDS MULTIFORMAT
Posted by Chelle Cordero at 1:03 AM 4 comments:

Posted by Chelle Cordero at 12:10 AM No comments:

October is Domestic Violence Awareness Month
and this is a theme that is built into the story of
Common Bond, Tangled Hearts
Layne Gillette’s world is turned upside down when a man she has never met shows up to lay claim as the father of her 6-year old son. When Layne’s abusive “ex-husband” shows up, they are torn apart by danger, kidnapping and lies.

She just knew it was going to happen. Layne had finally fallen asleep during the very early morning hours and she hadn't heard her alarm clock chirping for the first thirty minutes. It was really only when Dennis shook her shoulder when she realized how late it was… the alarm had woken her son.
They were rushing through their morning trying to get ready, If Dennis missed the school bus, she was going to have to ask one of her neighbors to drive him to school. She hated to impose on the people around her. Layne had learned that every favor was a debt to be paid back, sometimes at prices much too high for her comfort. But she didn't own her own car and the walk to the school was just too far.
Dennis spilled his milk while he tried to gobble down the toaster pastry she tossed at him in a last ditch effort to get him ready to leave. Layne caught herself before she actually yelled, but Dennis started to pout anyway. It wasn't his fault that this morning was so askew. She kept reminding herself that. It was thanks to his father, his biological father… that damn Justin Ross. What right did he have to force his way into her home and preoccupy her thoughts all night?
She remembered to run water into Dennis' breakfast dishes although there was no way she would be able to take the time to wash and dry them this morning. Layne had thrown her own clothes on in a haphazard manner and had barely passed a brush through her golden curls, but her next hurdle after seeing Dennis off to school was getting to her job, a long walk in the opposite direction of the school building.
Layne worked as a receptionist at the local realty office. She was generally very good with people and her boss didn’t question her education, or lack of it. So long as she did her job well he was happy. The job was ideal because she was able to have the school bus drop Dennis off at the nearby corner. Since the office was in a small model house, there was an extra room where Dennis could nap, do his homework, or play a game. There was even a small yard he could sit in. She never had to worry about his whereabouts and he had gotten very friendly with the older children of one of the realty agents. Rita often let one or both of her kids come to the office after school to sit and play with Dennis. He never got a chance to feel neglected.
Layne pulled the door open to reveal Justin getting ready to knock.
"What are you doing here, again?" Layne said under her breath. She didn't want to upset Dennis before he had to go to school.
"I… I told you I would be back to talk." He looked down at Dennis and noticed that the boy was watching him with those very interested and very big golden eyes. "I thought Dennis would have left for school already."
She didn't take kindly to his criticism. Just because he left some sperm in a cup seven years ago didn't give him the right to barge into her life and criticize the way she was raising their… her son.
"We're running late. If you would just get out of our way…"
"Was he supposed to catch that school bus?" Justin didn't move.
Layne gave a resigned sigh, they had obviously missed it after all. "Yes."
"I'll drive him." Justin was looking just a little too eager for Layne's composure.
"No…"
"But Mom, I'm going to be late and Mrs. Chase is giving out our parts for the Memorial Day play today." Dennis whined. The stranger didn’t look as scary to him today as he did last night. Besides, his mother had told him they used to be friends.
"Come on, my car is right downstairs." Justin smiled as he encouraged her.
"I have to come with you." Layne relented. She wasn't going to chance putting her son in this stranger's car, a stranger that probably thought he had a right to the boy.
"Okay."
"Will you be able to drive me back?" She would have preferred to get out at Dennis' school with him, but then there would be no way she could get back to her job anywhere near on time. Layne needed her job.
"Sure." Justin waited while Layne locked the door and then led the way to his car.
Posted by Chelle Cordero at 1:37 AM No comments:

Have you ever been a patient in an ambulance? How did it make you feel? Did you wonder about the people who were caring for you, what their training was, how much they cared about your well being? I'd love to hear your comments below.

I have the memory of being a patient twice in the past, once after a relatively minor car accident and once for a severe asthma attack. The asthma attack was especially scary because the treatment en-route was vital, it was definitely more than just a transport.

I also have the terrific perspective of being one of those trained individuals giving care to patients on the way to hospital. I’ve been a volunteer EMT with my local ambulance corps since 1986. Sometimes the care provided is simple compassion and transport… sometimes we work hard to save a life. I’ve delivered babies - and I’ve done CPR trying to restart a heart. Both successful CPR and holding a newborn in your arms can give you a really heady feeling.

My entire family is in emergency services, both volunteer and career. That’s why, when I wanted to write a mystery suspense, it seemed natural to make my characters emergency service professionals. Going by my own experiences, where else do you get to see so much of life?

I encourage each of you to consider volunteering with your local ambulance squad; the rewards of being able to do something to help, to give some people the only chance they may have, and to know that you have provided (at the minimum) comfort and reassurance is never-ending. There are many ways to be a vital part of your community, give your ambulance corps a chance – it is definitely worth it.

investigation of a brutal multiple homicide, a troubled son and a

Jennings. When Julie becomes the subject of an obsession, it puts both

of them in danger... 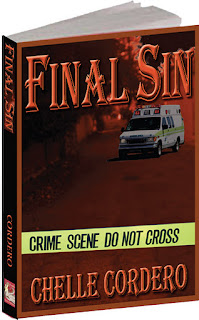 Posted by Chelle Cordero at 2:19 PM No comments:

Just send a self-addressed and stamped envelope to:

and I’ll send back with two trading cards PLUS!

Posted by Chelle Cordero at 12:17 AM No comments: