12/8/13 WEWRIWA a community of writers and readers

See more at the WeWriWa blog

This week I decided to share a snippet from my romantic suspense A Chaunce of Riches (and no it is not a misspelling). These 8 lines, thanks to creative punctuation, are from the opening scene.

Only in his fifties, Chaunce died suddenly while using a treadmill at a private gym, he left a wife and son and loads of business rivals behind; now someone was sending threatening notes to the company and the house. Flipping through the folder, Ben frowned and shook his head, the family had tried to keep themselves isolated from the public, probably in an attempt to protect themselves from the same kind of journalists the publication paid on staff. While there was an occasional headshot of Julian Chaunce, Ben had seen no pictures of the family and he was expecting to see a bland middle-age woman when the door finally opened.
“I am so sorry to keep you waiting, my son was having a bit of a crisis,” she stopped short as Ben stood up from his chair and turned to face her; after seeing him her face drained of color.
All Ben could think of was how young she still looked in her light blue slacks and the tailored striped man’s shirt she was wearing; her hips were a little wider, a little womanlier, but she was still as lithe as she ever was. His gaze traveled up to her face, it had been years since he had seen those eyes staring back at him.


“Sam?” his lips felt parched as he managed to say her name. 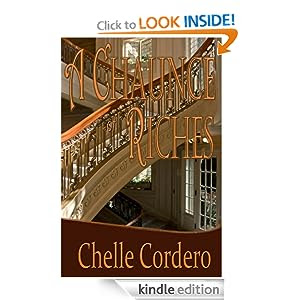 WOW! Powerful beginning making the reader want to know what in the world is going on. Perfect eight and an example of how to begin a story. Thanks, Chelle.

ohh, there's tension for ya! ho-hum, another job, whoa is that really her? Love that. :)

That's a wham bam opening right there! Wow! So, I'm guessing he takes the job : )

I love the story premise and the opening is intense! Can't wait for more, excellent excerpt!

Wow! That got my attention. Can't wait for more. Plenty of conflict with that kind of history

Great job! I like your descriptions and mature heroes! Gotta love 'em!

A shock to both of them--and the reader.

Wonderful description of his reaction to her. Already very excited about this story! Great job! :)

Intense! Definitely curious to know more about who is threatening them and why. Great 8!