What is religion? ~ #MondayBlogs

Religion is a belief system, a road map of sorts, something to give us all guidance through life. Yes, many of these belief systems have a Deity (mono or poly theistic) that we direct our prayers and hopes to, but ultimately the rules that are dictated by a particular belief system are designed to help us function and thrive in this world among our fellow humans.

Religion should not be used as a mask, a false front or an excuse for intolerance or cruelty. There are extremists in every religion who use interpretations of commandments to their own self-serving benefit. Unfortunately when these extremists represent themselves as spokespersons of the faith, there are others who let their resentments rule. Religious precepts are misunderstood and prejudice begins.

Some religions are philosophies, a way of living life using positivity, compassion, and cooperation. There are people who believe in a higher-power, but not a god – nature, the earth’s elements, their fellow man/woman, and their own inner strength. Atheism, mistakenly cited as a belief that there is NO god is really a lack of belief that there is a god — it’s a minor difference but not as negative as some claim. Agnostics neither claim that there is a god, nor do they claim there isn’t; in many ways agnostics are relatively open-minded to possibilities.

“The term interfaith dialogue refers to cooperative, constructive and positive interaction between people of different religious traditions (i.e., "faiths") and/or spiritual or humanistic beliefs, at both the individual and institutional levels.” [Wikipedia] An open dialogue between people of different faiths is not an attempt to merge or dissolve religious beliefs; rather it is a way to work together with mutual respect. Learning about other faiths should never be seen as an affront to one’s own religion or belief system. Education is, in Judaism, a mitzvah, a commandment and something we should all be doing; other faiths have similar edicts.

It shouldn’t matter if you read the King James Bible, the Hebrew Tanakh, the Hindi Sanskrit, the Buddhist Tipitaka, or the Muslim Quran… it shouldn’t matter if you study the sky and the stars, or let the soil run through your fingers, or if you are Wiccan, Atheist, Jehovah's Witness, or celebrate Kwanzaa… we are ALL quite literally in this thing TOGETHER. All religions and belief systems share commandments and principles that encourage the love of family, respect for life (human and animal), and provide guidance to help us share this great planet.

I am pleased to say that my family is interfaith. While we each remain true to our individual upbringing, it is a joy to share our unique cultures with each other. It is a blessing to observe the Ruach (Hebrew word meaning energy and spirit) in our rituals. Ultimately our family thrives on LOVE.

So be who you are and practice your faith. And if you find it hard to be compatible with others, don’t meet it with anger and hostility — use it as an opportunity to LEARN about your own and other religions. You’ll be pleasantly surprised at how many similarities there really are.

Faith should never be divisive; we are all one people in the long run. 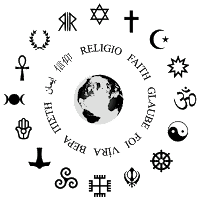 Posted by Chelle Cordero at 2:57 AM