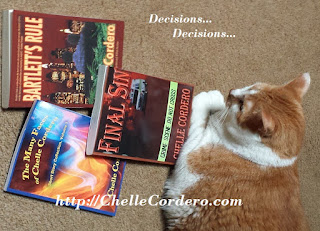 We had to say good-bye to one of our pussycats this morning. It was a sudden illness that took Mario from us, the vet and the vet tech did what they could but there was no saving him. And I am heartbroken over the loss of this Gentle Giant of a pussycat.


So this post is dedicated to Mario, born in July 2008
(please forgive my self-indulgence).

He was part of a litter and surprisingly he was left behind at the shelter as the "runt" - he grew to be such a big boy weighing in at over 25-pounds. Mario pretty much dwarfed his brothers Tigger and Luigi. He loved to chase reflections on the floor, the walls, and the ceiling... for a big cat he moved really fast. One of his favorite "toys" was an electric tower fan, it had a little shiny logo and when it caught the sunlight the reflection skittered across the floor, Mario had so much fun with it.

I nicknamed him (in addition to my Gentle Giant) my Creamsicle because he was orange and white. As a tiny little kitten (we got him when he was three months old) he looked like he had dipped his nose into a bottle of white paint, and I still can't believe that something that tiny grew so big.


the same I did model the cat in two of my novels after him (Mauszer)
Mario played with his brothers, often stole their food, and fought and cuddled with them non-stop. We adopted Mario along with Tigger and Luigi in early September 2008 from our local animal shelter; Tigger was the "old man" at 3 years old, Mario (3 months) and Luigi (2 months) were the "babies".

At this point I know he is romping at the Rainbow Bridge with brothers and sisters he never physically met (Mark and I have had multiple cats for most of our married life), but I am convinced that their spirits still roam through our home — as I am sure Mario's spirit will pay visits every so often as well.

He leaves us with beautiful memories. We love you Mario, thank you for being a part of our lives. 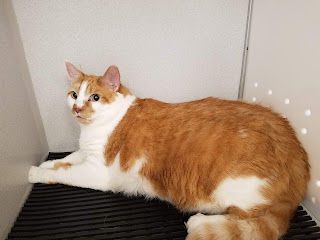 Posted by Chelle Cordero at 7:40 AM