No one practices their faith exactly the same way as the next guy, and I’m talking about the SAME religions. Everything is subject to interpretation. There’s an old joke in Judaism (my own faith) that goes, “If you ask two Rabbis you’ll get three opinions.”

Almost every religious reference, NO MATTER WHICH ONE, is accompanied by “…and by this, it means…” (no wonder TV commentators think they can tell the viewers “this is what you heard”). In their defense most religious volumes have been translated from their original language to the current language of the people. It’s a well known fact that you can lose a lot in the translation.

If you read scripture or religious tenets OF ANY FAITH, you can really find yourself horrified at some of the writings.

·       “If a man have a stubborn and rebellious son, which will not obey the voice of his father, or the voice of his mother, and that, when they have chastened him, will not hearken unto them: Then shall his father and his mother lay hold on him, and bring him out unto the elders of his city, and unto the gate of his place; And they shall say unto the elders of his city, This our son is stubborn and rebellious, he will not obey our voice; he is a glutton, and a drunkard. And all the men of his city shall stone him with stones, that he die: so shalt thou put evil away from among you; and all Israel shall hear, and fear.” [Deuteronomy 21:18-21]

·       “I decided to order a man to lead the prayer and then take a flame to burn all those, who had not left their houses for the prayer, burning them alive inside their homes.” [Bukhari 11:626]

Are you cringing yet? These are just three of MANY examples from the Old Testament, New Testament, and the Quaran.

The other day, on Facebook of course, someone posted a meme that showed a picture of Judge Amy Coney Barrett (a Catholic) and Rep. Ilhan Omar (a Muslim) which was headed, “When her religion is a problem, but hers isn’t”… My response was an innocent “Religion shouldn't matter in either case.” Another FB member (whom I don’t know) responded abruptly about how violent the Quaran is and “Muslims have been fighting Christians since Mohammed!!”

Indeed there have been many religious wars through the centuries and ALL of our spiritual texts do contain items that seem callous or violent. But, it is my opinion, that every human being, while respecting the main preaching of their chosen faith, must decide on what kind of a life they want to live. No matter what you call your higher power, HE (or SHE) has also given commandments to love your fellow man, to always strive to be better, and to make this world a better place.

Surely we’ve all sinned, sometimes by error and sometimes in anger. But really, are we that different from our fellow beings. We feel pain, we love, we cry, we bleed, and in the end we ALL die. 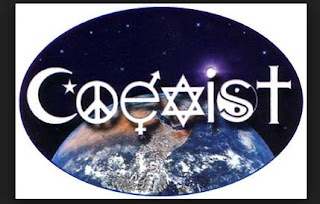