Since the Holiday season is literally just around the corner - here's a Christmas Eve scene from Courage of the Heart:
Back at the house, Liz got the boys off to bed early before they put presents under the tree. Davie explained to Adam that no one under the age of eighteen was allowed to see the pile of presents until Christmas morning.
The immediate household would have some time together to rip into their packages and enjoy muffins and cider for breakfast before the onslaught of relatives descended. She forewarned Adam that her father still took his costumed-Santa role very seriously for the little ones.
Adam had brought a few presents along to hand out as well and he took his turn placing them under the tree. He had asked Davie several questions about the household decorating scheme and colors before their visit so he could choose something appropriate for her father and Liz. When he turned to drop a small package for Davie into her Christmas stocking, he saw that she had hung a stocking with his name alongside hers. Piles of gaily-wrapped gifts were placed under the tree; Davie brought the two shopping bags of presents downstairs and added her packages to the pile.
Liz brought in a tray of hot-mulled-cider and warned them that she had spiked it liberally. The two couples sat in the den and enjoyed the crackling fire that Albert had started in the fireplace.
"So Adam, I imagine this was even crazier than Davie had described." Liz spoke good-naturedly.
"Actually, she was pretty accurate."
"You didn't have any family back in Pennsylvania?" Albert couldn't picture anything but crowds for the holidays.
"No sir, it was just my father and me. And he really wasn't around often."
Albert sat forward on the couch.
"Listen Adam, the name is Al. I really can't get friendly with someone who keeps calling me sir."
Adam nodded
Liz and Albert explained that the boys were off from school for a few weeks; they would be staying at the house with them. In January, the four of them would be going back to Maryland to close out the condo and put it up for sale.
Al asked Adam if he would be coming back down for the wedding. Adam looked at Davie and said he'd love to.
Liz asked Davie to help her clean up from the refreshments. While the two women were alone, Liz turned to Davie with some encouragement. "I think your father likes Adam. He is a very nice young man." She stopped and smiled. "I think we just have to understand Al is going to occasionally have bouts of jealously about the young man who has obviously stolen his daughter's heart."
"Thanks Liz." Davie put the tray down in the kitchen and turned to Elizabeth. "You are a very good influence on Dad. Me too."
"Merry Christmas, Davie." Liz hugged her. She didn't let Davie see the happy tears welling up in her eyes. 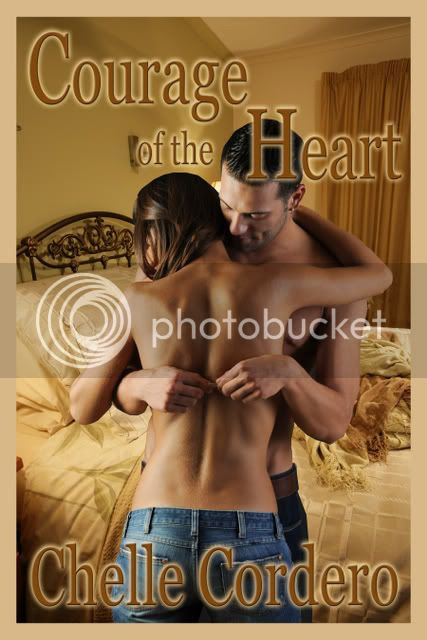 Courage of the Heart
(coming February 2009)
Posted by Chelle Cordero at 3:41 AM