A special piece of jewelry

I recently entered a contest (and lost) where the grand prize was $1500 worth of jewelry. We had to write about a special piece of jewelry that we owned and its significance. This was hard for me to do, I don't often wear jewelry - I usually wear even my wedding ring only when we are dressed and going out! But I do have a few very meaningful pieces... my wedding ring, my (& his) high school rings, a gold filigree Star-of-David ring I bought for myself in Miami while vacationing with my parents, a diamond heart pendant from hubby and a few more pieces. Then I thought about the "promise ring" Mark gave me in 1974 -

When my hubby first proposed to me he wanted to buy me a promise ring because he thought it was a romantic notion, but I was ever the pragmatic one and we were just 2 kids from financially challenged families - I wanted to save the money for all of the dreams we were weaving, besides he insisted that he would also be buying me a diamond engagement ring later on.

We walked into a “five-and-dime store” and he purchased a pretty piece of costume jewelry I liked - the gem, made to look like a 1 1/2-carat emerald cut diamond, was plastic and the pseudo-white gold band was cheap metal, but I was in love with it.

The “promise ring” was eventually replaced with a beautiful 1/3 carat (genuine) diamond in white gold engagement ring. Then came the gold band followed by the house in the suburbs and two magnificent offspring. He still gives me “diamonds” now and then - sometimes real, sometimes cubic zirconium - and he always gives me his love. 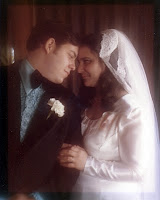 Thirty five years later, the costume jewelry promise ring still sits in my jewelry box - it still shines beautifully and reminds me everyday that the only thing we’ve ever needed was each others’ love.

In my novel Hostage Heart, Deanna Blair has a very special piece of jewelry that helps to show how very close she was with her maternal grandmother - it was her grandmother's birthstone ruby ring.

The name of the gemstone in her grandmother's ring, Ruby, was taken from the Latin word for Red, Rubens. "Two magical elements are associated with the symbolism of this colour: fire and blood, implying warmth and life for mankind. So ruby-red is not just any old colour, no, it is absolutely undiluted, hot, passionate, powerful colour. Like no other gemstone, the ruby is the perfect way to express powerful feelings. Instead of symbolising a calm, controlled affection, a ring set with a precious ruby bears witness to that passionate, unbridled love that people can feel for each other." (from the International Colored Gemstone Association)

The ring was all that Deanna had left that had belonged to her mamere after the hurricane flood waters devastated New Orleans; those flood waters had also taken the life of the old woman whose body was never recovered. Deanna learned the Cajun ways of her heritage from her grandmother, it was a heritage she was fiercely proud of.

She smiled broadly when she saw the book and flipped it over to read the book jacket description. “Thank you.” She had been raised with lots of Creole and Cajun customs especially at her mamere’s house. Deanna even spoke some of the old Creole language her grandmother had taught her. She hoped to pass many customs of her heritage on to her daughter one day. She read the card. “Thank you Ryan. This was so sweet of you.” Deanna sounded genuinely happy. She leaned over the table and gave him a quick kiss on the lips. “My roots do mean a lot to me.”

Life was hard after the hurricanes swept through, destroying her parents' home and livelihood... An errand for her boss - a chance encounter with a crew of bank robbers - a kind man who tried to help her ... a man who isn't all he seems...no, he is so much more

In print or e-book

Hostage Heart is also available at any Barnes & Noble Information Desk (or ask if it is ON their shelves), and in Rockland County NY at
Raider Bookshop at 99 Lafayette Avenue in Suffern &
Arts Alliance of Haverstraw at 91 Broadway in the Village of Haverstraw
Tell us about YOUR special piece of jewelry...

Posted by Chelle Cordero at 6:20 PM

I also LOVED your excerpt from Hostage Heart. As someone who is very close with her family, this too, touched my heart. It was something that I could relate to. I can't wait to get my hands on it! Yet another Cordero classic! :)

Hi Chelle, thanks for stopping by and saying hi. The only special piece of jewelry I have is my wife, and today happens to be her birthday. We went to Disneyland and out to dinner with the fam.