I am posting my short story NOT ALONE from the anthology FOREVER FRIENDS in 4 installments beginning Aug 22. (by the way, if you are impatient, sign up on my ChelleWrites Yahoo Group mail list and download it in its entirety)
read part 1 - 8/22
Not Alone
- part 2 of 4
As word of Kimmie’s death spread across the campus, the ostracizing began. Her friends and classmates were too stunned to think beyond losing such a young, vibrant friend. Kimmie’s parents had suffered one of the worst things that ever could happen to a parent. They had no room for forgiveness in their hearts; grief was taking up too much space. It was easier to blame someone; it was far easier to blame Jordan than to try to make sense of it. And our friends, they turned on Jordan as well. No one had any time or any will to think of the desolation that Jordan was feeling.
I cried non-stop at Kimmie’s funeral and thought of all the long phone calls we had and the shopping trips to the mall and cramming for tests. None of my peers was dry eyed either. I couldn’t imagine a world without my best friend or a world without her laughter. We had been friends since our freshman year of high school and I felt a monumental loss. Each of us was self-absorbed in what we had lost when Kimmie’s mother let out a wail of grief that twisted our guts. Even though I knew that Jordan had been banned from attending the funeral, I was angry that he wasn’t there to witness the mourning, the loss and the questions of how we were all supposed to go on without Kimmie in our lives.
That was yesterday.
I woke up crying again. I cried not only for the loss of my closest and dearest friend, but also for the loss of the camaraderie we had with Jordan. It was obvious that Jordan had an interest in Kimmie at the beginning of previous school year and, as Kimmie admitted, he was just so damn cute. I tried to match them up; she knew how he felt. Kimmie wasn’t interested in Jordan in that way though and eventually he was able to accept that. He was always there to lend her his shoulder when she needed to talk about some guy she was seeing or to high-five her when she was happy after a date. He was there for me too; he just never seemed to think of me as anything more than a kid sister.
So the three of us became good friends and since he was a year ahead of us in school, he never minded showing us around or helping us learn a little more about campus life. Kimmie was always the first person I would call when I needed to talk and if she didn’t answer her phone, Jordan was next. I cried even harder when I realized that I had lost not one but two friends. None of our other friends wanted anything to do with Jordan; his loudest critic was Kimmie’s boyfriend. No one bothered to ask the boyfriend why he left Kimmie that night, no one assigned any of the blame to him. It was all Jordan’s fault.
I dressed but I couldn’t bring myself to go to any of my classes. Kimmie’s dad came by to pick up the rest of his daughter’s things; we shared a suite in the dorms. He hugged me and thanked me for the friendship I shared with his daughter. He told me how much it meant to him and his wife to hear me talk about Kimmie during the memorial service. Then he asked me to help keep Kimmie alive by never forgetting her. When he left, the tears began to fall again and I stared at a picture of my best friend while I cried.
Maybe I didn’t really, or maybe I did, but I heard Kimmie’s voice telling me that Jordan needed me. I thought that maybe I was losing my mind. It could have just been the desperation I felt, but I knew that I heard her voice. So I went over to Jordan’s off-campus apartment. Kim-mie and I had gone there often. I stared at his door for a few minutes before I actually knocked.
Jordan looked horrible when he answered the door. And he looked surprised.
“What are you doing here? Did you forget a few names?”
“I didn’t come to call you names. I didn’t come to be angry.”
“Then why are you here?”
“I wanted to talk.” He was quiet as he stared at me. “May I come in?”
read part 3 - 9/3 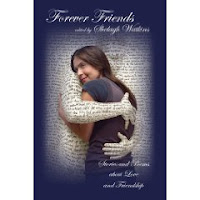 Posted by Chelle Cordero at 2:43 AM