So what turns you on? 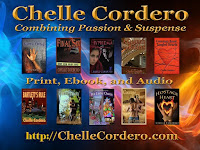 Yes, my couples in love have SEX (come on admit it, you might have done that once or twice as well) and sometimes it is “spelled” out in the pages of my story — and sometimes it is just implied — but I would like to believe that any sexual acts, depicted or implied, are appropriate and CONSENSUAL. I try to fit the heat level of my stories to the theme of the book. In my book Final Sin there is more grit to some of the scenes, after all the plot involves an obsessive, possessive and deranged murderer and the danger he poses; I felt that some of the consensual sex scenes between the couple had to be a little “over-the-top” because that is part of what sets the killer off.

While in recent years the tide has turned (hopefully) thanks to Women’s Lib, the #MeToo movement, and other enlightenment I remember almost all “romance” books during my young childhood and teen years (not that I was allowed to read them at that tender age) being labeled Bodice Rippers. It seems that old-school romance readers could not accept that a young virginal female would willingly accept a lover, she had to be seduced, coerced and sometimes even forced into the act BUT SHE WOULD ENJOY IT! After that she would become addicted to that one more experienced male and their love would blossom.

Indeed television, movies and periodicals used S E X to sell products, everything from men’s aftershave to soda pop to cars and more was promoted by scantily clad and breathy sounding sculpted females. In much later years some commercials started to feature muscled male hunks so I guess public sentiment began to turn around. I remember a now-defunct soap opera my mom watched, it featured a prominent character who was a successful romance writer of Bodice Rippers; in a later episode this author’s daughter became a rape victim — suddenly this character rebelled against the entire romance novel industry because of the Bodice Ripper connection. The character never evolved to the point that romance meant LOVE and healthy sexual relations (whether or not explicit in the books).

In today’s world the romance industry is much more accepting of women initiating a physical relationship, it definitely must be consensual. While I am not personally familiar with Porn, I do know the few erotica stories I’ve read also promote mutual agreement and not trickery or force. Women don’t have to be sweet virgins. I believe that today’s romance is more centered on two people (female/male, male/male, or female/female) who are mutually attracted to each other and willingly enter into any physical contact agreed on. I also see more authors using non-sexual acts (in addition to physical) as symbols of romance.

I was inspired to write this post after reading comments on a Facebook romance-writers’ group about book covers. Several comments were made about sexy book covers, specifically bare male chests and open pants exposing ALMOST everything; surprisingly less comments were made about scantily clad females. One poster implied that the sexier the cover (they believed) the more boring the writing! I did note that there were many remarks that linked anything with explicit sex to erotica or porn. Please understand with today’s online retailers being the best source for most books (except for The BIG 5), covers will attract new readers, and the blurbs will convince them to buy (hopefully these are true indicators of the content). Covers and blurbs are marketing tools.

As a romance author (most commonly with the sub-genre of romantic suspense) I understand that everyone’s taste varies and not everyone will want to read romance (at any heat level) just like some people don’t care for sci-fi, fantasy, historical or others. I am not insulted if someone chooses not to read my stories because of the genre, however romance is still LITERATURE which can be defined as any written work. Don’t be insulted, you may not be my target audience when I pen my novels. Still I would sincerely love for you to give my work a try and let me know what you think; read the blurbs, some stories just may interest you even though they are Romance.

Posted by Chelle Cordero at 3:16 PM