The Value of Street Smarts

I genuinely believe that the smartest man I ever knew was my Dad. Before joining the service and then marrying my Mom, the highest level of education he had was 8th grade; he was the product of a broken marriage where neither parent really took much responsibility. After the war (WW2) he went back to earn his GED and later went to a trade school to learn to be a Tool and Die Maker.

In addition to his profession, he was a wonderful husband and took care of my Mom (she became disabled a few years into their marriage), a great father raising two daughters and teaching them, even way back then, that they were as good as ANY man or woman, he was a community leader and Auxiliary Captain at our local police precinct. Daddy didn’t have the opportunity of a fancy education or letters after his name, but he always seemed to know how to do the right thing.

Through the years there were some who actually looked down on him because of his humble beginnings, the fact that he worked with his hands, and he wasn’t interested in putting on a show to impress others. My Dad truly was a hard-working man. Maybe if he had a college degree or a monied background he could have climbed some corporate ladder or even opened his own business… but he always provided for his family and he was always there for his children.

As Auxiliary Captain in the NYPD, he had impressive leadership skills, he always knew when to listen and never belittled anyone, but you knew he was in charge. He was methodical in thought and really “read people” very well. I know there were extreme times when my Dad lost his temper, but most times he was always controlled and welcoming. His family, my Mom, my sister and I adored him, we respected him — he was our hero.

I told you about my Dad because so often I’ve heard people look down on others who have not had Ivy League educations or who  took pride in getting their hands dirty to do a good day’s work. Daddy was one of those special people who had an enormous amount of “Street Smarts”, otherwise known as common sense. Some, SOME people who have fancy educations also are gifted with common sense but there is no guarantee that the two will go hand-in-hand. To be honest, if it only has to be one or the other, I prefer the street smarts.

Happy Veterans Day to my Dad and all of those who have served our country. 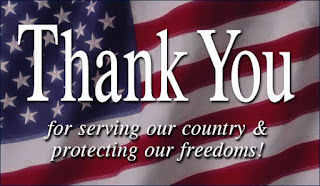 Posted by Chelle Cordero at 6:43 AM