Back at our old home in Rockland County, NY we got to see numerous deer and some other wildlife traipsing through our back yard. While the suburban town wasn’t exactly wide open spaces, we were close enough to a large park system and, let’s face facts, builders put our homes up and encroached on the wildlife homes more than a bit. We lived within (a long) walking distance to a busy roadway so, unfortunately, it wasn’t uncommon to find that a domestic pet that had gotten loose or a wild animal got hit by cars doing highway speeds. It was always heartbreaking.

There were a few trees in our backyard that visiting deer liked to eat from, they would congregate and take turns munching on the leaves. A favorite tree for “snacking” fell (literally) victim to a heavy wind and rain storm and was removed because it was blocking part of my neighbor’s driveway. Quite a few days later I noticed a group of deer feasting on the next tree whose branches didn’t come as close to the ground as the one that had fallen. I also noticed a smaller deer that was noticeably limping and looking longingly at the other deer munching; one of her back legs was twisted and she couldn’t stand on it long enough to reach the leaves she hungered for.

The other deer finished their munching and ran off leaving this poor little girl staring at the ground to see if any of the others had left her leaves. My heart broke for her and I broke a cardinal rule of mine. I never wanted to teach a wild animal to trust or depend on humans because unfortunately that could lead to their being hurt. I was on my second floor deck and I went to my fridge and got an apple, cut it into pieces and tossed them down towards her. She looked up at me cautiously and then sniffed the fruit I had tossed before gobbling it up, her hunger was evident.

I saw her a handful of times after that and occasionally tossed another apple or carrot her way, I never tried to approach her. Maybe it was only my imagination but she seemed to recognize me and I could swear she smiled. As the few weeks went by she seemed to be limping less and less and when she saw me on the deck she even came closer and did a little dance step as if to show me she was healing. Then the day came when she was able to use her back legs enough to reach the leaves from the “deer tree” as I called it and with leaves in her mouth she came back towards the deck and looked up at me and munched. Eventually she had healed enough to begin to run with her pack again and after a while it became difficult to pick her out of the group because she didn’t even limp anymore.

We moved from there a year and a half ago and I often think of the deer I came to affectionately call “Gimpy” – no it wasn’t exactly a politically correct name, but I thought of her with a lot of fondness. I hope that Gimpy is still doing well and I thank her for letting me see the healing process and the gratitude she showed me.

Today we live in a much more countrified and open area. While several homes dot the land there are many species of wildlife that we see in our yards and neighborhood including deer and even coyotes, bears and wild turkeys. I get the impression that the animals have allowed us to live amongst them (no hunting is allowed so they treat it as THEIR sanctuary) and we more or less get along peacefully. I admit, like many of my neighbors, I often toss vegetable and fruit scraps in areas where the deer and squirrels come to munch and while I still do not encourage them to come to me, they will stand a few yards away and watch me (cautiously).

Sometimes while I am sitting on my back deck, much closer to the ground this time, I look up to see a deer at the gate just watching me. Although we are miles away from where we used to live, in my fantasies I sometimes wonder if Gimpy had passed my description along to have her friends check in on me. 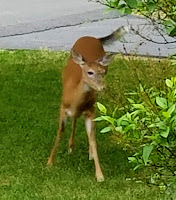 Posted by Chelle Cordero at 6:09 AM