10/6/13 WEWRIWA a community of writers and readers

This week's entry is from my new paranormal suspense Karma Visited:

It was shortly after they were married when she had one of her nightmares. She woke shaking and crying and panicked by what she had seen. Scott held her and tried to calm her, it felt good to be comforted by his strong arms. He kept telling her it was just a nightmare, she was safe. He offered comfort up until the point that she finally told him what she had experienced and she trusted him enough to tell him about her belief that the dreams were real, and then he laughed at her instead of listening. He called her a fool; he made fun of her for days. His taunts reminded her of the ridicule she suffered in middle school. She was humiliated and decided she would be better off never to share her dreams with him again. 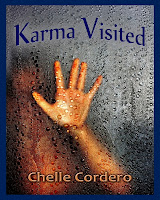 Do you believe in karma?
Annie Furman has a gift that allows her, while she sleeps, to visit people in their time of need - but who will be there for her when she needs help? Undersheriff Dave Turner is investigating a series of home invasions and homicides. He has no idea that solving this case will lead him to the woman of his dreams.


Karma Visited captured me from the beginning and never let go. This tale of good, evil, and a miraculous gift between has a cast of characters you’ll never forget. Well done, Chelle Cordero.
Charmaine Gordon, Author of Survive and Thrive novels and Mature Romances

and Coming Soon in Audio!

Great use of the 8's, Chelle. Although if he'd laughed at my nightmare, he'd be missing some teeth! Well done.

Actually she should never share anything with him again, what a jerk. That's total emotional abuse!

Oh, I hope Karma comes back and visits him. So mean! Can't wait to see her grow into her power.

He'll get his, the S.O.B. Meanwhile I can't wait to read what happens next.
So I posted at midnight and found I never signed up last week. Please look at last weeks list, hit my name and check out 10/6/13 wewriwa for the cool post. Thanks.

Man, he's nasty! Hope he gets his. That makes her all the more sympathetic, though. Nice job.

Well, unanimous here, the guy is a jerk. But the story premise is fascinating, can't wait to read more. Terrific snippet!

Oh sad, but a great snippet.

Jerk, indeed. He'll be sorry, I'm sure. And she'll be better off with someone who listens.

Lots of information packed into this 8. Good job. I lie the premise! :-)

An excellent eight there. I hope he gets what he deserves for that.