This scene continues right after last week. Justin is frustrated and pacing his motel room. He is remembering what led him to look for Layne and their son, a son he didn't know about. Hopefully this will answer some of last week's questions. Again, this is all a memory, this has been edited to fit.

"Justin, maybe you'd better sit down," Larry put his unlit pipe in his mouth, "it seems that you and some of your friends decided to do a little bit of celebrating just prior to your graduation."
A little bit of a celebration was an understatement, he remembered at least two days of nursing a hangover.
"You were the victim of a fraternity house prank, you passed out in the offices of a sperm bank."
"I wasn't even conscious, that's impossible, isn't it?"
"Apparently not; your grandfather received an anonymous letter a few years ago, he wanted things checked out thoroughly. You have a six year old son, his name is Dennis."
"What am I supposed to do with this?"
"Your grandfather and I discussed this just a week before he died, you have to go see the mother, find out what claims, if any, she plans to make against the company. This boy is legally your heir.” 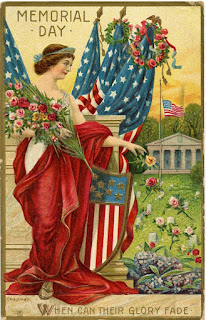 Here in the states, it is Memorial Day Weekend
Memorial Day is a day of remembering the men and women who died while serving.
On Memorial Day, the flag of the United States is raised briskly to the top of the staff and then solemnly lowered to the half-staff position, where it remains only until noon.It is then raised to full-staff for the remainder of the day. The half-staff position remembers the more than one million men and women who gave their lives in service of their country. At noon, their memory is raised by the living, who resolve not to let their sacrifice be in vain, but to rise up in their stead and continue the fight for liberty and justice for all.
Posted by Chelle Cordero at 9:30 PM

Oh wow, that was some mighty prank. interesting snippet, Chelle.

Oh my! This doesn't sound good. Isn't the sperm bank supposed to be anonymous?

Well that's a humdinger of a prank if I ever heard of one! Good premise for the story, Chelle!

How devastating for both sides . . . and how interesting that Justin's grandfather and lawyer are more worried about the financial repercussions than the child. Or Justin's feelings.

Question: How financially liable are sperm donors to their offspring? Or do Justin's grandfather and lawyer WANT Justin to claim the child as his heir?

It sounds to me like the whole thing may be a set up for both Layne and Justin. . . but why? Great eight and really wonderful way to get people talking and speculating, Chelle!

Wow, this goes beyond prank! But an interesting set up for sure. Can't wait to read more!

You do have a way of coming up with great off the beaten path stories, Chelle. More. I definitely want more.

Like a few others, I'm sure that this had to be a set up against both Layne and Justin. But why? What is it about the two of them that made messing with them in this way important?

Ah yes, this definitely answers some questions. It raises others, though--makes me want to Google whether a sperm bank baby is a legal heir, for one thing.

That's a prank gone wrong if I ever heard of one. Well done. I like the tone of the scene.

When I wrote this story I had heard of a case where a sperm donor applied for parental rights. Rapists have also been granted parental rights! According to this site http://www.legalmatch.com/law-library/article/sperm-donor-parental-rightsobligations.html it seems to be even more of a grey area than I thought. Especially considering that Justin unknowingly donated he never waived his rights. I guess it all comes down to how much legal representation you can afford.
I'm glad I got everyone pondering this ;)

Wow, that's some terrible friends he had.

Intriguing premise for a story. I'm interesting in finding out how everyone concern will handle this. What a prank! I think he could do with better friends. lol

Would she even have known who the father was if he hadn't gone to tell her?

Well then... that's a perspective-changer if I ever heard of one. Nicely laid out, Chelle. You did it in such a way that those pivotal words -- about the son-- have maximum impact.