Later that day, after the mall incident, Justin brings Layne and Dennis to the park for a picnic lunch. Dennis is playing at the pond's edge, Justin is keeping a watchful eye on him. Layne is still embarrassed about the mall incident.

(the following has been edited to fit)  ...and now the eight nine:

"I am so very sorry for the way I acted in the mall."

"Don't worry, being a parent is still new to me, I guess it's spooky when you hear about all the things that can happen to a kid." Justin made sure to keep an eye on Dennis while he spoke.

"It's not just that, I've worried that Charlie was going to try to snatch him ever since he was born."

"But Layne," Justin turned to her, "he hasn't found you in six years; maybe he's not even looking. You left before he even knew if you were pregnant, he probably figures that you would have had an abortion."

"I thought about it, but I kept denying that I was pregnant; by the time I admitted it, I felt pregnant, I couldn't do it anymore." She tossed a glance at her son, "I'm glad I didn't."

"So am I," Justin whispered as he watched her face.

It's been ten years since Hurricane Katrina and Hurricane Rita ravaged the coastal communities off of the Gulf of Mexico. The devastation in Louisiana and especially New Orleans was heartbreaking and frightening. More than 1500 people died in Louisiana as a result of the storms and flooding.

My husband spent six weeks as a first responder down there giving medical aid and other assistance. When he came home he was filled with stories about the resiliency of the people who lived down there, about their remarkable spirit and their determination.

His stories inspired me to write Hostage Heart - to commemorate this event I am giving away a free audiobook download of Hostage Heart to one person who comments on my Author Facebook Page post about Hurricanes Katrina and Rita. Just follow this LINK to be entered in the drawing 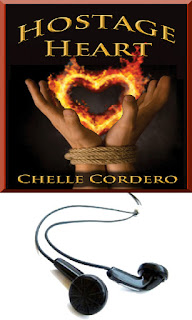 Win a FREE Audio Book or one of two E-books

Quite often common sense goes out the window when the safety of your own child is concerned. Although it might be true that he's not looking for her, the worry is always there ... great snippet!

Gotta love that Justin. You've created that perfect scene where the reader can feel the happy pause. Very nicely done.

What a tangle, she is bound to be watchful but it sounds like she has a very supportive partner in Justin.

It would be nice if Charlie had forgotten but I'm not sure he is that type of guy.

Justin's such a good guy. I get the feeling he's surprised he feels attached to the child. Great snippet, Chelle.

I get the feeling that we may find out that Layne's ex is indeed after her. It could be a red herring of course.

I'm just waiting for the shoe to drop. The bad guy can't be far behind. Nice foreshadowing.

Aww, tender scene. and of course we KNOW Charlie is going to show up. Really enjoying the complexity of the story, great snippet.

Poignant scene. You manage to touch on all of the emotional things going on in your story in one short scene. Very nice.

Tender scene and all for the boy and of course , her. lovely scene with bad things to come.

I so love that last line. Warms the heart. :)

Yeah, there's no way he gave up. People that go to such lengths don't do so easily. They better be careful!

Such a tender scene.

Awww, what a sweetheart line from him in the end. Love his logic, but I can understand her paranoia. Great snippet.