We're jumping ahead a bit. Layne told Justin about the forced insemination by a man she married for protection after being in the foster system. She has been living under an assumed name so he won't find her and never filed for divorce in order to keep hiding. Justin and she have grown closer (yes, intimate) and spending time together with their son (who does not know Justin is his father). The following scene is during a shopping trip Justin is treating them to. Justin just asked Layne if there is something she wants, anything she's dreamt of having...

Layne shrugged, "people like me don't have dreams, Justin."

"Come on, everybody has dreams."

"Maybe, when I was a little girl," she laughed, "I wanted to invent a robot to collect the eggs on the farm so I could stay in bed later." Her voice faded, "after my grandma died, I just dreamt that I would wake up on the farm again."

Justin knew how difficult things had been; she told him about being bounced around between foster homes and how she met Charlie.

"And now, Layne, do you have dreams now?"

Justin put his arm around her shoulder and leaned down close to her ear, "Layne, I'll do whatever I can to help you."

Today is our daughter's birthday.
She's a grown woman, married, highly skilled and
working in a job where she literally saves people lives.
Her "baby brother" is also an adult, married and
working in an equally responsible position.

I can relate to Layne's need to want
to always protect your child,
to always want only the best for her or him.
That's a feeling that is a part of parenting
every minute of every day.

Happy Birthday to our darling Jenni,
you've brought magic to our lives. 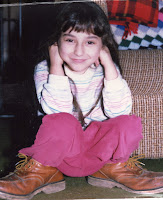 I like how he is such a good guy. I hope soon they'll be able to make dreams together.

Nice! She seems absolutely broken and he's just the man to fix it. On a side note, Growing up I always wanted a "Rosie" like from the Jetsons, so I can relate to her robot idea.

Poor Layne!
Life has chewed her up and spat her out!
I can see our hero has his work cut out for him.

The good man is about to be challenged. Heartwarming story. I'm overwhelmed by both of the main characters.

Happy B'day to Jenni and many more, with love.

You're just outright yanking on my heartstrings, now, Chelle. :)

I certainly hope his family doesn't want to use that child!

Wow, another emotional and a little heart-breaking scene. Great job!

What wonderful insight into her mind -- and the mind of many single parents. Beautiful job, albeit a bit heartbreaking.

Oh I do hope her dream will come true and he helps her to obtain it. Lovely snippet with hope for the future.

She has very good, motherly dreams all right! Quite a heart tugging snippet and I'm so glad she has Justin to help her!

Sounds like those conscious desires we think about while awake.
We call them "dreams."
It isn't the dreams we experience while we're asleep.
I often like the conscious ones better.
Your snippet sparked a sweet personal reverie, thanks!
Nice 8!

She's such a great mother. I hope he does everything he promises. :)

Such a gentle, powerful scene. Really like these two! Suggestion: Watch your dialogue to make sure you capitalize the sentences within the quotes. Taking off my editor hat now . . .

One of your best snippets yet, Chelle. Layne's final words say so much about her life, her mindset, and what she needs to learn in the course of the book.

What heartbreakingly simple dreams... Makes you hope he can help her achieve them!

I'm really liking him and hoping he'll take care of her jerk husband for her.

I love these lines: "Maybe, when I was a little girl," she laughed, "I wanted to invent a robot to collect the eggs on the farm so I could stay in bed later." Her voice faded, "after my grandma died, I just dreamt that I would wake up on the farm again." Beautiful. Poignant. Wonderful snippet, Chelle. :-)

Ooooh, the heartstrings have been tugged. So much emotion packed into those sentences of her dream. Beautifully done, Chelle.

No dreams? That's just... sad. Very sad, and very powerful as an image. It really sets up the rest of the snippet well too.