I know what you did... ~ #MondayBlogs

Knowing where all the bodies are buried (figuratively) is a daunting responsibility.

Between the easy availability of personal information and things that have been said and done basically in front of me, I find that I have kept many secrets for others. Just search a person's name on the internet, use a genealogy database, find a person's Facebook profile, and simply listening to most people who might tend to get a bit loose with their tongues, and it's not hard to possess secret background info.

Okay MOST of the info is not criminal or earth-shattering to the many, but most of the secrets would cause extreme embarrassment to its owners.

Ironically many people don't realize how much personal information (even details they want to keep hidden) can be found online, are told at family or school reunions, get worked into conversations and sometimes are hinted at or spilled by themselves — especially if the person has had a few drinks  — and then at some point days, or even years, later the truth comes out. Sometimes an individual has fabricated a complete lie (guilt? ego? shame?) and then gets tangled in the details.

I know secrets that some people have tried their best to keep hidden; maybe I was there when something happened, maybe I heard it from another knowledgeable party, or maybe I accidentally came across it while I researched something unrelated for an article I was assigned... but the fact is, I know.

I've heard war stories from someone who never served, about offspring that had no knowledge of half-siblings, know of marriages that weren't really the first for each but that's what one party was told, criminal histories that didn't get divulged even on job applications, certifications and diplomas that were counterfeit, and more. Sometimes anger at someone who has belittled others or been careless about other people's feelings have led me to IMAGINE spilling the beans, I've managed to resist so far.

When faced with knowledge about someone I try to see who the truth would actually cause pain to and resist the temptation; most times the true victim would be a complete innocent. When faced with with an unpleasant truth and then seeing the liar causing more pain (like the father who claimed to but never served making his son feel less than a man because a physical impairment kept the son out of service), it sometimes is so tempting. Sometimes though, no matter how tempting, I know I would crush belief systems, destroy a child's admiration for a parent, and cause emotional pain to a spouse who considers the mate to be the world.

I may not be willing to expose some of these secrets or lies, but that doesn't mean they will never be found out. Someone else may also know and perhaps that someone will act with malice. Imagine the pain a loved one may feel when, after a death, paperwork is sorted for insurance purposes and such and disturbing details come to light and suddenly the loss of a loved one is compounded by not even being able to ask questions or talk about it. And the day you are found out that embarrassment may be multiplied many times over.

If you have a dark secret make sure that those around you won't get blindsided. Most secrets are often a bit of embarrassment to the owner, but they can be a devastating loss to the loved ones who always believed in you. Take away the power from those who may have learned your secrets unwillingly, or even purposely, and allow your loved ones to really know you. 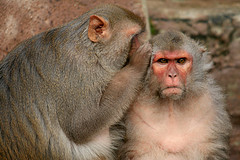 Posted by Chelle Cordero at 2:49 AM