This scene is still at the shopping mall. While Justin is paying for a camcorder he's buying so Layne can record Dennis in his school play, Layne realizes that her son isn't by her side. (this might be a bit choppy, I wanted to fit it all in to a certain point)

"Where's Dennis," Layne started calling his name in a panic.

Justin questioned salespeople on the floor; one woman, assuming the three were a normal family out for the day, told him that his son was over by the video game display.

"Layne, I found him," Justin guided her over to the video games; she saw Dennis and grabbed the little boy's arm.

"Don't ever do that again," she was on the verge of tears.

"Mommy," Dennis was startled and began to cry.

"Oh God. I'm sorry baby," she hugged him and cried, "I was so scared that somebody had taken you away."

Justin told the salesman he'd be right back for the packages, he put an arm around Layne and took Dennis by the hand to guide them out of the store.

Dennis was still protesting, he didn't understand what he had done to upset his mother so badly.

At the car Justin knelt in front of Dennis, "You must never scare your mom like that again, don't walk away from her in a crowded place." Wanting to take care of this woman and child was a strange feeling for him.

On this day in history, August 16, 1954
Sports Illustrated was published for the first time.
It was claimed that 250,000 subscriptions had been sold
before the first issue came off of the presses. 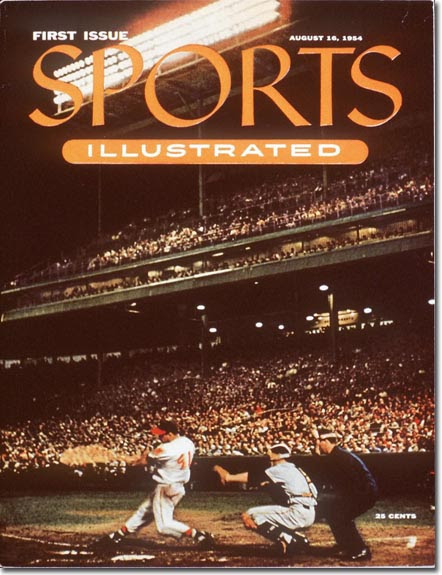 Can you imagine selling that many copies
before the book was even available?!?!

Although it might have felt strange, it's a natural thing I'd say to care for others who are in distress ... nice snippet ...

That's so scary, especially that he could be kidnap any minute.

Been there, said that!
Nicely done Chelle.

Losing a child, even for a split-second is a parent's nightmare come true. Great foreshadowing here. I like how he's surprised at his reaction.

I like how you're making it clear with her reactions to normal things (all kids stop by the video games) that she's on edge.

I also like that the other characters aren't sure if she's just an overprotective parent or if there's something else going on.

Definitely a terrifying moment. I'm glad Justin was there to help. :)

So glad they found him safe and sound. What a horrible feeling to think your child is missing. Well done scene with the adults panicking and the child not understanding why they're so upset. :)

Very nicely done. The dialogue and scene are exactly like anything we'd all encounter.

I love the last line. Just enough of a twist to pique your interest. I definitely want to know more about these characters. Very nicely done!

As a parent, I've been there in that place. And yeah, you yell at the kid because you're so darn scared. Good snippet, Chelle. :)

Tense moments for Mom! I can understand why she panicked.

Been there, done that, when the child wanders off in the store! Really a terrific snippet...I'm enjoying this story very much.

Very realistic for how a situation like that would go down in real life. I'd say you nailed the feeling. I love how he's becoming so protective and caring of the family, like he's already calling him his own family. Great snippet.

Oh, that is a terrible feeling! Nicely done--showing how he's grappling with new feelings. A BIG responsibility. :-)